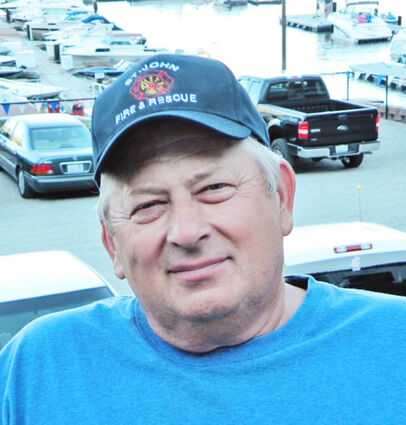 John Conrad Blumenshein entered into heaven after a brave three-week battle with COVID on October 24, 2021. His wife, Susan and children were by his side.

John was born at St. Ignatius Hospital in Colfax on February 3, 1950, and was the first child of Dan and Millie Blumenshein. He was raised on a farm, six miles out of St. John, with two sisters, and various farm animals. Growing up, John was very active in raising and showing pigs in 4-H and FFA at the local Stock Show. He was also a member of the 4-year undefeated and fabulous St. John football team of 1965-68. Along with football and pigs, John developed a love of hunting, fishing, and camping. He shared these loves with his many friends and family members throughout the years.

John attended Spokane Community College where he served as part of the student council in which he was instrumental in getting a gymnasium for the college. He graduated with a diesel mechanics degree, and went to work for St. John Hardware as their IH mechanic. In 1976, he took over the family farm, and in 1980, he began his career of over 32 years with the Whitman County Road Department.

On June 9, 1984, John married the love of his life, Susan Kramer, after a 4-year courtship. They bought a house in St. John, where Sue was a teacher, and raised Hayley and David. John was always very active as a volunteer in his community. He served as a fireman for over 36 years, Community Club president for 10 years, Gun Club member for forever, Hunter's Safety instructor for 20 years, and the pancake flipper at the annual Stock Show for countless years. He was also a very active volunteer at the Lake Chelan Yacht Club, where the family enjoyed their cabin stays, boating, and socializing for over 30 years. He was a wonderful friend and never considered anyone a stranger.

John is survived by his wife Susan, his children, Hayley of Lewiston, Idaho, and David of Olympia, Wash .; sisters, Mary Jo of Worley, Idaho, and Claire Anne of Elko, Nevada, along with many relatives and friends.

A celebration of John's life will be held at noon on Saturday, November 6, at the St. John Methodist Church. Bruning Funeral Home is caring for the family. On-line condolences can be made at http://www.bruningfuneralhome.com.