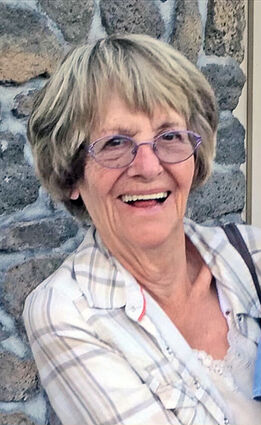 She was born April 10, 1935 in Steptoe, WA, to Ira and Elizabeth (Jones) Roberts. She spent her whole life in the Steptoe and Colfax area. As a young girl Sherry enjoyed riding horses and was an exceptional rider. Sherry married Clyde Hatley on August 20, 1952, and they recently celebrated their 69th wedding anniversary. Sherry worked at St. Ignatius Hospital in Colfax for eight years. She also managed the Colfax Elks Lodge for 11 years. She loved the people at the Elks; she made the best margaritas around and hosted large dinners for the Cougar men's basketball teams.

She left her mark by driving bus for the Colfax School District for thirty years. She enjoyed driving the girls' basketball team coached by her brother, Vic Roberts. One memorable moment happened during the Girl's state A tournament in Tacoma. While driving to the Tacoma Dome the bus was pulled over by the State Patrol. When the patrolman entered the bus, he waved and said, "I'm from Pomeroy and wanted to wish the team good luck at the tournament." Sherry and her family loved camping and spending time at Boyer Park. She drove wheat truck at harvest on the family farm and loved spending time with her grandchildren, attending Cougar basketball games, and helping out with the senior citizens. She was extremely proud of her entire family and loved spending time with them.

The family suggests memorial donations be made to the Whitman Hospital Auxiliary or charity of donor's choice. They would like to thank all of the doctors and nurses at Whitman Hospital and Whitman Medical Group for the fabulous care and support over these past few years. A special thank you goes out to Peggy Zaring and Carol Moore of HomeCare for providing such great care, unending support, and good company.

A service to celebrate Sherry's life will be planned at a later date. She will be laid to rest in the Bethel Cemetery at Steptoe. On-line guest book is at http://www.bruningfuneralhome.com