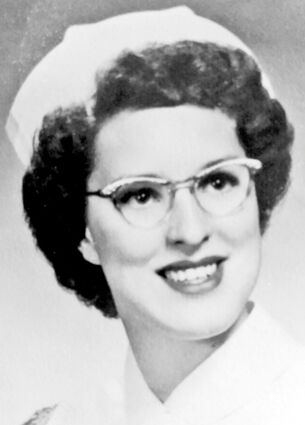 Dorothy J. Elkins, life-long Oakesdale resident, passed away July 21, 2021, at the Whitman Health & Rehab Center in Colfax. She was 84.

Dorothy was born October 29, 1936, in Oakesdale to Eugene and Gladys Pittman Ellis. Dorothy holds the great distinction of being born in, raised in, and married in the same house the family lived at in Oakesdale. She graduated from Oakesdale High School in 1954 and went on to the Deaconess School of Nursing in Spokane where she became an RN in 1957. She married William "Bill" Elkins on May 25, 1956.

Dorothy worked in nursing until they started their family and then she was happy being a "stay-at-home" mom. Once the kids were in school she did private duty nursing for Dr. Slind out of his Colfax practice. Later in life she worked for more than 27 years as a nurse at the Tekoa Care Center. She was a lifelong member of the Presbyterian Church and also a member of the Granite Hill Club. Dorothy was an excellent seamstress and she enjoyed sewing and quilting. She liked to read and she was devoted to the "Fit Farm" where she went daily for her exercise routine. One of her greatest joys was doing things with the grandchildren. Bill passed away in 2012 and Dorothy continued to call Oakesdale home as long as she could. She has lived at The Courtyard in Colfax for the past few months after spending time with both daughters.

The viewing will take place at Bruning Funeral Home in Colfax, Wash., on Monday from 9:00 AM to 5:00 PM, and at the church for one hour prior to services. The funeral service will be held at 10:00 AM on Wednesday, July 28, at the Community Presbyterian Church in Oakesdale with a private vault interment to follow at the Oakesdale Cemetery.

Memorials are suggested to the Community Presbyterian Church of Oakesdale, the Lilac Services for the Blind Foundation or to the Oakesdale Fire Department. Online condolences may be sent to http://www.bruningfuneralhome.com