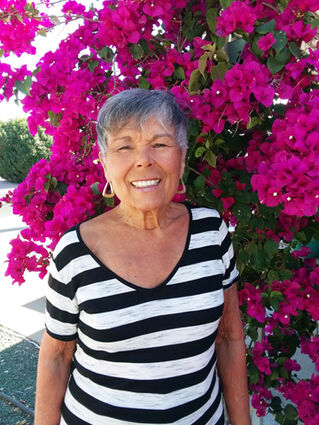 Mary Lou was born July 27, 1944, in Colfax, Wash., to Harry & Florence (Johnson) Ledeman. In 1945 they moved down to the farm outside of Pullman where she grew up and where she continued to live throughout her life. Mary Lou spent her childhood helping her father Harry run the farm. In 1962 Mary Lou graduated from Pullman High School.

After graduation she went to airline school for three months, and then came back to Pullman where she met and married James H. Berry. The two were married for ten years and had two daughters Debbie & Jodi. They later divorced. Mary Lou held various careers throughout her life, but her favorite was as a House Mother at WSU for the sororities of Alpha Gamma Delta & Chi Omega Beta. Mary Lou married Charles Cadle in 2002. She eventually retired back to her childhood farm and enjoyed gardening, traveling, and time spent with the various clubs she was a part of. Spending time with her family was important to her. She devoted much of her time to Beta Sigma Phi, Junior Miss, Daughters of the Nile, P.E.O., and Eastern Star where she was surrounded by all of her dearest friends.

Family will greet friends at a visitation from 4 to 7 p.m. on Tuesday, July 13, at Kimball Funeral Home. A memorial celebration will be held at the Foundry Kitchen & Cocktails in Pullman, Wash., on Sunday July 18, 2021, from 1 to 4 p.m.

Kimball Funeral Home of Pullman, WA has been entrusted with arrangements. Memorial donations are suggested to the P.E.O. Foundation for scholarships or to the Shriners Hospital . Online condolences may be sent to http://www.kimballfh.com