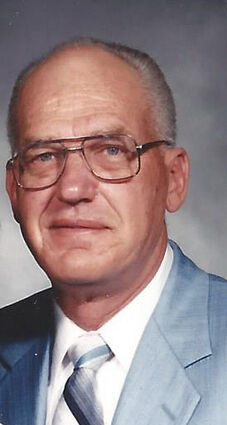 Lloyd Francis Morgan died Friday, April 12, 2019, at age 90 in Spokane. He was born June 8, 1928, in Pomeroy, Washington, to Florence Ella (Long) and Harold Martin Morgan, the eldest of two children. At this time, Harold worked for a variety of farmers and moved where he could to find work.

Lloyd started school in Garfield County at Rainwater which was a three-mile walk one way. The next several years found him in classes at Central Ferry, Pomeroy, Dixie and Deadman schools. In the ninth grade, he returned to Pomeroy. After starting the tenth grade in Pomeroy, he got ill and never returned to school.

The next spring, Lloyd started farming in partnership with his father and they farmed together for 20 years. He soon met and fell in love with Maxine Myrn Oldenburg. They were married October 15, 1949, in Pomeroy. They settled down and farmed on Deadman Creek and later at Central Ferry where they built their home.

Lloyd taught himself how to play the harmonica, guitar, banjo and steel guitar. He couldn't read music, but was quick to pick up a tune and improvise. His singing was always a source of pride and comfort for his mother and he "cut a couple of 45 RPM records" at that time.

In 1959, Lloyd was diagnosed with Acromegalia. Succesful treatments were very rare, but a team of Spokane doctors were able to, over several months, remove Lloyd's pituitary gland with radiation. Over the years, Lloyd's health was unusual and Maxine believed in the power of prayer that saved his life on more than one occasion.

The summer of 1966, Lloyd and Maxine were displaced from Central Ferry to Rosalia. The Army Corps of Engineers wanted to build the second of three dams on the Snake River. In the rush to finish harvest at Central Ferry and to move before school started, they were surprised when the house they were to move into at Rosalia burned. The move still had to take place, and temporary quarters had to be developed in a rush. A 10' x 12' cabin was moved to the farm, outhouse readied and beds for their two children were set up in the small shop 300 feet from the cabin. It was a cold winter, but after four months, a basement had been poured, a house was moved in, heat hooked up and a plank provided access to the front door.

Once they settled into a new routine, Lloyd and Maxine worked on the house, unpacked and got involved in Kenova Grange activities. Lloyd served in several positions and was a past Master. He was a life member of the Malden Masonic Lodge where he recently received a 50 year pin, and was a past Master. Lloyd also enjoyed his activities in the El Katif and Whitman County Shrine. Both Lloyd and Maxine were avid fundraisers on behalf of the organization and the Shrine Hospital in Spokane.

Lloyd was a progressive farmer and while living on the river, built a pond for erosion control. Upon moving to the Rosalia area, he encountered much the same problem and once again built a pond. For these efforts, he received Conservation Farmer of the Year. He later stocked the Rosalia pond with rainbow trout and had a 'catch and release' policy for the school children and relatives who would bring families out to fish. Lloyd explained to his young audiences the importance of a pond for flood control, water conservation and increased drainage for the neighboring fields.

When they lived near Pomeroy, his hobbies were hunting, fishing, searching for Indian artifacts and trap shooting. After moving to the Rosalia area, he gave up the first three hobbies, but continued to trap shoot until the early 1980's when failing eyesight became an issue. He then joined Maxine in researching genealogy and they spent much of their spare time developing their family trees.

Services will be at Richardson Brown Funeral Home, Pomeroy, Washington, on April 19, 2019, at 11:00 a.m., followed by a brief graveside service and luncheon. Memorial donations may be given in his name to the Shriners Hospital for Children-Spokane or Union Gospel Mission-Spokane.