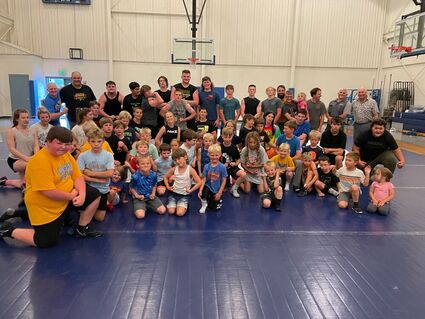 Jack McBride | Special to The Gazette

About 55 aspiring young grapplers ages 5-19 are participating this week in the inaugural Eddie Olson Wrestling Clinic in the auxiliary gymnasium at Jennings Elementary School in Colfax.

According to wrestling coach Jack McBride, 55 wrestlers ages 5-19 are in attendance at the clinic, which is meant to honor former Colfax wrestling coach and teacher Eddie Olson.

"Long retired, he was a very beloved coach and teacher at our school district," McBride said. "We just wanted to pay homage."

The clinic is designed to teach basic wrestling skills and provide amateur wrestlers with a foundation in the sport , McBride said.