Ensley and Montgomery to wrestle Feb. 12 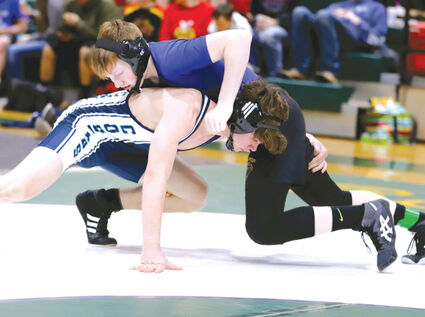 Tekoa-Rosalia freshman Cullen Billings sprawls in defense of a shot by Jenkins senior Jonathon Thompson in a 145-pound match.

Walker Montgomery, a Garfield-Palouse sophomore at 120 pounds, and Trentin Ensley, a Colfax senior at 182 pounds, placed in the District 7/9 tournament at Northwest Christian.

Tekoa-Rosalia freshman Cullen Billings was eliminated in the 145-pound class.

Montgomery finished fifth in his weight to advance.

He opened the tournament with a bye then was pinned by Republic-Curlew freshman Emaan Sandhu in 1:17. He then received three byes in the consolation round, before being pinned again, this time by Rearda...