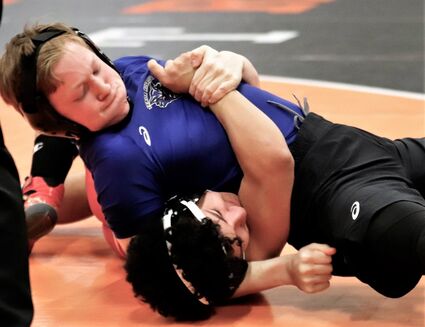 Cullen Billings, of Tekoa-Rosalia, uses a head-and-arm to pin Drake Broderson, of White Swan, during a 145-pound bout.

POMEROY - Four Tekoa-Rosalia wrestlers finished in the top four in their respective weight classes at the Pomeroy Christmas Tournament on Dec. 30.

In two instances, Timberwolves grappled teammates for a medal.

Eight teams participated. More than that canceled due to a winter storm that blanketed much of Eastern Washington and dropped mo...