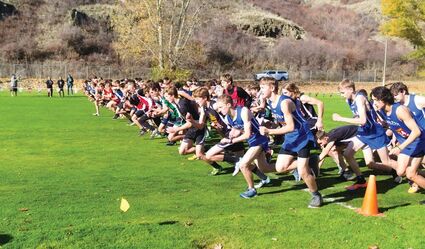 Justin Slayton I The Gazette

Boy's cross country teams take off from the start line at the Colfax Golf Course on Oct. 30.

COLFAX - Colfax hosted 164 cross country runners for the District 7 and 9 1B/2B Regional Championships on Oct. 30 at the Colfax Golf Club.

The Garfield-Palouse girls team won with a score of 56 and Colfax was in sixth with 124 points. Fifty-four girls competed.