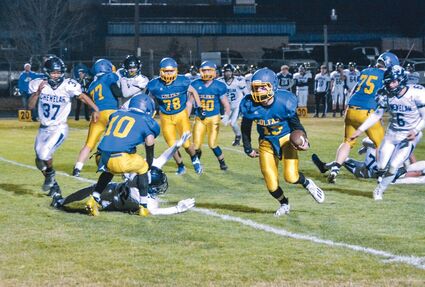 Colfax Bulldog Damian Demler sprints toward the endzone for the Bulldogs' second touchdown.

COLFAX — Homecoming is a time for home teams to win and the Colfax Bulldogs football did just that.

“It was a good game and we were very pleased,” said Coach Mike Morgan. “We were expecting it to come down to the wire.”

Colfax took the lead early and kept it.

The Cougars scored first on a 65-yard run and a successfully point-after kick. Colfax came back with a Damian Demler 36-yard pass to JD Peterson for a touchdown a 2-point conversion run by Trentin Ensley.

The Bulldogs scored a second time in the first quarter on a 2...