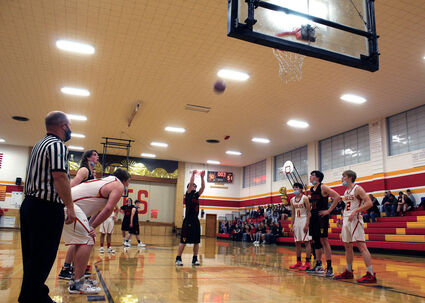 Austin Jones, in his last game as a Garfield-Palouse four-year starter, shoots the first of two free throws with three seconds left on May 27.

ST. JOHN — Garfield-Palouse guard Austin Jones did not come out of the game against St. John-Endicott-LaCrosse early for a senior night tribute.

He was needed on the floor to the end. Off a missed Vikings free throw, Jones, from the opposite corner of half-court, chased down the rebound, got fouled and went to the free-throw line with three seconds left. He made both to put Garfield-Palouse up 53-50.

A last heave from St. John-Endicott-LaCrosse missed and the Vikings won.

“Intelligent a player as he is athletic, Austin Jones was on his horse and got that rebound,” said Eagles Coach Mi...