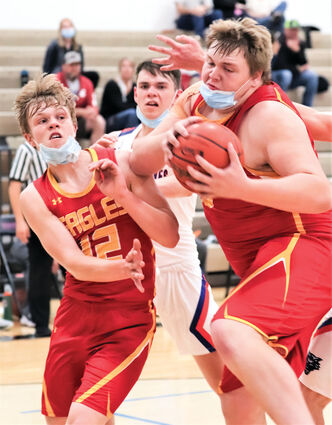 St. John-Endicott-LaCrosse seniors Jaden Danielson, No. 12, and Kameron Greenhalgh box out a Timberwolves player to grab a rebound.

"Both teams played hard. Lots of energy was expended throughout the entire game," Eagles Coach Mike Stubbs said. "It was an enjoyable game to watch."

"The second quarter was us regaining our balance ... the first quarter didn't go as well as we wanted," said Stubbs.