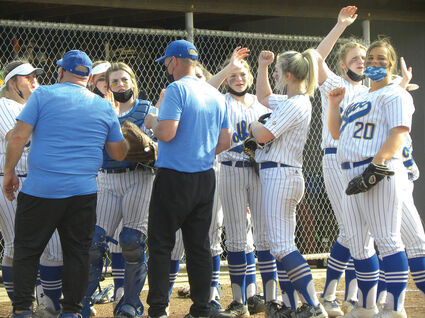 The Colfax softball team convenes at the dugout on the way to a 12-0 win in four innings in an April 23 doubleheader sweep of the Broncos.

COLFAX - Bulldogs softball has a nice problem to have.

"We're not getting a lot of innings in (though) we're getting games in," said Colfax Coach Tracy Imler.

The problem persisted last Friday on Senior Day at McDonald Park playing against the Lind-Ritzville-Sprague-Washtucna-Kahlotus Broncos.

"Basically, not a lot of competition for us," said Imler. "I was taking it easy on the base paths pretty e...