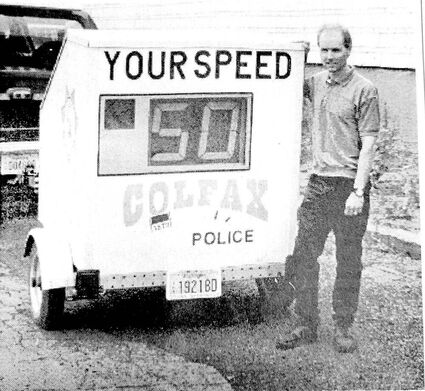 25 Years Ago Officer David Szambelan with the Colfax Police Department stands next to the radar speed indicator that was placed on the former IGA parking lot in Colfax. Southbound motorists passing the sign on Main Street would get a reading of their speed after a radar gun inside the box would record and display their speed. At least some of the motorists who saw their speeds on the board were later nabbed as they rounded the curve on the south end of town and headed for Pullman. Speeds for the 12 arrests were read by laser equipment in squad cars.

The fall term in Colfax College, under the presidency of Prof. F. N. English will commence on Sept. 30, the school session continuing 40 weeks. President English reports no changes in the faculty.