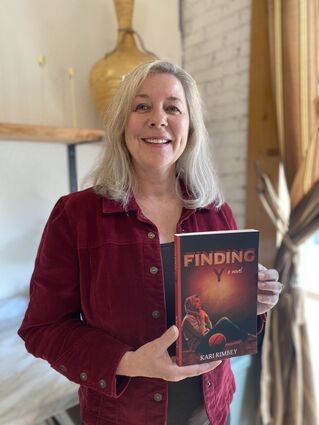 Special to The Gazette Colfax author Kairi Rimbey will have a book signing for her new novel, "Finding Y," this Saturday.

COLFAX - A local author recently released her second novel, this one set in Colfax.

Kairi Rimbey, 56, published her second novel Tuesday, May 24, and will have an upcoming book display at Rosaurs in the upcoming weeks.

"It's inspired by tragedy from one of my old high school classmates," she said. "It's not a true story, but it's inspired.

"My old classmate had killed himself after his brother died in a car accident. I inserted those feelings into it.

"It's not about suicide. It deals with grief, forgiveness," Rimbey said. "And there are happy things in it, too."

The book features a futuristic element and takes place in the fall of 2035, she said.

"My granddaughter read it at 12 years old and noticed that the person is 3 years old in 2022," she said.

The story takes place in Colfax and features local names, characters and settings in town.

"I live in Colfax. My kids grew up here and I have names of a lot of my family in the book," Rimbey said. "The names are mixed round. A lot of the local people that live here will pick up on that."

Rimbey published her first novel in 2021 and has lived in Coflax for 27 years.

"Really, for the story to be as deep as it is, it needed to be really familiar to the area," she noted.

Rimbey will also be a local authored featured at Moscow's Book and Brews event Saturday, June 18.

"It's a different thing. I have been in Christian Writers Conferences. I will be rubbing shoulders will all different walks of life, ideologies, approaches to writing, and a little bit of a ghost experience," she said. "I'm branching out beyond my normal everyday lifestyle."

Rimbey hopes readers will understand the normalization of healing from traumatic events with "Finding Y."

"People were able to understand forgivness with my last book. This book deals with grief and how different people involved in a traumatic situation can respond in a healthy way," she said. "The family that I witnessed in real life fell apart.

"My influence was based on a real situation.

"One son died and several years later, the other son committed suicide and the parents eventually divorced. There are some elements of a counseling nature."

Rimbey recommends readers be at least 12 and encourages anyone with an interest in sports, stories about coming of age, and people interested in the local areas to give "Finding Y" a try.

"There are things that people will identify with. The hometown feel of the basketball game and being involved with school are there," she said. "It is very much so a hometown book," she noted.

Olivia Harnack is the Editorial Intern and Journalist at the Whitman County Gazette. Olivia is enrolled at College for Creative Studies (Detroit, Mi.,) and is majoring in digital film studies. Olivia has previously worked with companies and organizations like TEDX, Keller Williams, and several directorial film agencies where she assisted on film sets. Olivia is in the process of enlisting in the Army National Guard and is eager to serve Whitman County.