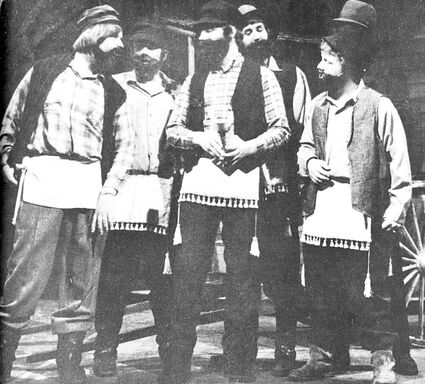 50 Years: Lines of "Fiddler" get final polish prior to a 3-night run Cast members of "Fiddler on the Rood" put the final polish on their lines before the curtain goes up tonight on the first of three evening performances. Rick Pearsons, right to the role of Tevye. Also pictured here, from the left, are Bob Skaife, Wally Toombs, Scott Brannan and Scott Ray.

CAUGHT IN THE ACT

Monday Evening Deputy Sheriff Green Smith arrested Earl Hodges and Arythur Baird, on a charge of burglarizing the story of F.W. Gaines in Colfax. Hodges was caught in the store. He had just tapped the till, taking 40 cents, and had concealed a box of cigars on his person, when held up by the officer.

From the Colfax Commoner Friday, April , 1922