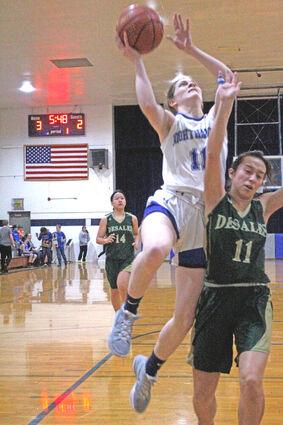 Oakesdale's Marilla Hockett (left) goes for a shot against DeSales' Emmalyne Jimenez (right) in a 1B game Jan. 14 in Oakesdale.

OAKESDALE - The Oakesdale Nighthawks returned home on Jan. 14 after a 77-30 win against Tekoa-Rosalia on Jan. 13 to take on the DeSales Fighting Irish.

Oakesdale defended its homecourt, taking down DeSales 72-28 in a one-sided affair.

"Our game plan was to really bring the pressure and pressure the ball no matter who had it," Oakesdale head coach Heidi Perry said. "And I think we did a good job on that. And it was really nice to see us execute that. We were pretty consistent, I think, throughout the game (with) keeping the pressure on."

Perry's Nighthawks squad opened the game with a 7-2 ru...