Fighting Irish stay atop 1B Southeast

DeSales pulls away from Oakesdale in league win 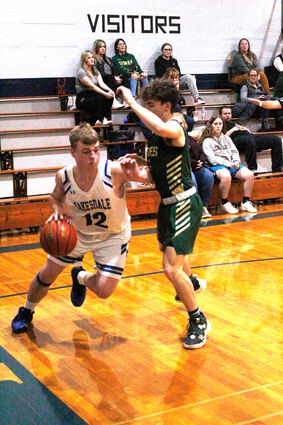 Oakesdale's Shawn Bober (12) dribbles along the baseline while guarded by a DeSales defender in a 1B southeast boys basketball game Jan. 14 in Oakesdale.

OAKESDALE - Coming into Jan. 14, DeSales was ranked second amongst 1B boys basketball teams in the most recent Associated Press Media Poll and Oakesdale was ranked seventh.

The Nighthawks were looking to bounce back after a two-game skid to Sunnyside Christian and Tekoa-Rosalia, and DeSales was looking to defend its position at the top of the 1B Southeast league.

"Defensively, coming into the game, we knew we had to shut down (Jackson) Perry," DeSales head coach Eric Wo...