Wildcats take another 'W' against Vikes 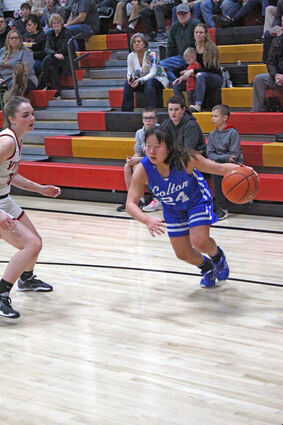 PALOUSE — The Colton Wildcats visited Palouse to take on their league-rival Garfield-Palouse Vikings on Jan. 6.

Colton improved to 8-1 on the season (3-0 in league competition) with a 55-43 win over Garfield-Palouse.

Neither team could find separation over the other in the opening quarter of the game. Both teams found themselves tied at five points apiece following a free throw by Colton’s Sidni Whitcomb with 4:24 left in the first.

Colton held a narrow 11-9 lead heading into the second quarter – and started building its lead from there.

After a Garfield-Palouse timeout with 6:16 left in the second frame, the Wildcats went on an 8-0 run to grow their lead to 23-13. The Vikings scored five straight to cut the lead down to five with 2:25 left in the quarter, but Colton ended the first half with a 6-2 run to take a 29-20 lead heading into halftime.

Kaydee Heitstuman nailed a 3-pointer with 6:17 to go in the third quarter to give Colton a 32-22 lead – its first double-digit lead of the game.

Garfield-Palouse responded a couple minutes later with Kennedy Cook converting an and-one play to get within seven, but the Wildcats went on a 12-9 run in the final 4:46 of the third quarter to head into the final eight minutes of regulation up 48-36.

Both teams scored on their opening possessions in the final frame and went on a scoring drought until 3:54 left in the game, where Colton made a shot to go up 52-39.

Cook again cut the lead down for the Vikings – hitting a mid-range jump shot with 1:52 left to get within 10, but that was the closest Garfield-Palouse was able to come and Colton headed back home with the 12-point win.

“I thought it was a real good win,” Colton head coach Clark Vining said. “Anytime you play on the road in this league, especially Palouse, you feel good about any win you get. I thought we did some really good things tonight. Made some great plays down the stretch – the Heitstuman (3-pointer) was probably the back-breaker in the end there. Sidni did a great job all night at (point guard), getting into the paint. But defensively we made enough plays to come out on top.”

Garfield-Palouse was able to hold firm for most of the game with Colton and had opportunities in the third and early fourth quarters to convert shots off turnovers, but couldn’t put the points up to get back into the game.

“We played some pretty good teams the first month,” Garfield-Palouse head coach Garrett Parrish said. “(Colton’s) no different. They’re a very good team and we wanted to come out and compete with them, and I thought we did that. We executed our game plan. Sidni Whitcomb – she had a phenomenal game. She made a lot of shots and they did great. I thought our girls did a good job competing – it seemed like it could’ve gotten away from us a little bit and we didn’t let it and we kept battling. So I was happy with our effort tonight.”

Whitcomb led Colton with 23 points, while Heitstuman and Kyndra Stout both added 10 points, respectively, for the Wildcats.

Kyra Brantner led the Vikings with 12 points and Cook added 11.