The best of the year for sports in Whitman County 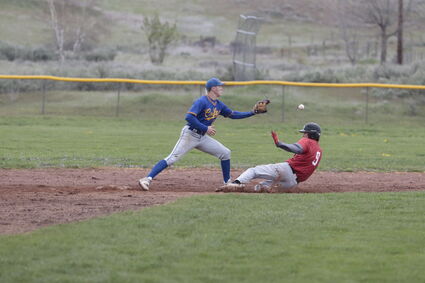 Lind-Ritzville/Sprague's Jace Kelly slides under the outstretched arms of the Bulldogs' second-baseman May 6 in Ritzville.

As the new year comes to be and 2022 continues to fade away, here are some notable sporting events around the county that are sure to have a lasting impact.

Oakesdale capped off a season in which it didn't lose a match against 1B opposition with a 1B state championship win against Mossyrock – it's second championship in a row and its ninth in 11 years, further cementing the Nighthawks as the premiere 1B volleyball team in the state.

Colfax's girls teams showed out in the 2B tournaments. Not only did the school see its highest placing in volleyball in several years – finishing second in the state tournament, but they also placed fourth in softball and second in the 2022 state basketball tournament. Colfax also is currently 11-0 and ranks first amongst 2B girls basketball teams.

Garfield-Palouse was able to send its whole cross country team to state championships in Pasco, a first for the program. It was the third time in a row the girls team was sent to state and the first time in school history for the boys. The girls team finished second out of eight teams, and the boys team finished ninth out of 16 teams.

The girls teams of Colfax were not the only ones to reach high levels in their respective state tournaments. The boys basketball team finished 4th in the 2B state tournament, spurred on by Washington 2B Player of the Year John Lustig, and the 13th-ranked Colfax baseball team saw an underdog run in the state tournament, finishing fourth.

5. Athletes medal in track and field

As individuals, the track and field competitors from Whitman County brought home more than a dozen medals in individual and relay events, with Oakesdale's Jessie Reed bringing the gold in long jump and the 4x400 SJEL relay team of Matthew Logen, Rory Maloney, Ryan Anderson and Logan Marconi brought the gold home, as well.

At the Aug. 26 sprint boat races, Richie Baltierra and Michael Dixon were honored at the Webb's Slough races. The ashes of Baltierra were spread on the waters after the races by racers Michael Thomas and Clint O'Keefe, whose boat also serves as a memorial for Dixon, making every race in the Slough and the boat a memorial of two loved people in the community.

Mike Leach coached Washington State University football from 2012-2019 and helped make the Cougars football program relevant again. Leach had already received notoriety for the invention of the Air Raid offense, which helped propel the Cougars back to prominence.

Washington State under Leach made a bowl game six out of eight seasons and saw ESPN's College Gameday return to Pullman for the first time since the Ryan Leaf days, and ended the season with a Top-10 national finish in 2018.

Leach died from complications of a heart condition on Dec. 12.

The Colton Wildcats softball team made the 1B state tournament as the 2nd-seed and played like it, outscoring its two opponents 29-9 in its first two tournament games. Although the Wildcats fell 4-1 to Liberty Christian in the state championship, Colton still played a dominant season and tournament.

The Vikings returned a football team to the gridiron for the first time in four years against the SJEL Eagles on Sept. 9, and were blown out, losing 55-0.

The two teams played against on Sept. 23, St. John-Endicott/LaCrosse was undefeated and Garfield-Palouse was still searching for its first win.

The game that ensued was one no one expected. Both teams saw injuries during the game and The Vikings and the Eagles played into four overtimes, with the Eagles taking the 54-48 win at around 11:30 p.m.

It was one of the best 1B games in Washington and was maybe the best football game played in the county.

Here's to many more amazing events and stories in 2023.