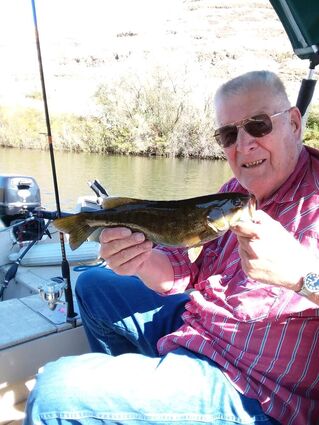 Dan was born May 22, 1942 in Mansfield, Washington, to Asa and Elma Parrish Mills. The family moved to St. John when he was a young child and Dan grew up there along with his younger brother Dennis. He attended St. John High School where he played basketball; graduating in 1960.

He attended college in Ellensburg and played basketball on the college team. Dan and Monna Morrison had met and began dating when they were in high school together and they married on November 24, 1962, in St. John.

Dan had worked for Chet Gisselburg all through high school and was forming his habits of work ethic from an early age. At the time of his marriage he worked for Leinweber Brothers in Colfax and in 1963 they made their home in St. John where they began their family. Dan started for the Whitman County Road Department in 1964. Dan bought his own backhoe and in 1972 he struck out on his own with "Dan Mills General Excavating". A business he ran successfully with the help of his three sons as "hired crew". He worked hard and often long hours so spending time with him on the job was when you got to know him.

He loved to fish and did find time occasionally to cast his line. They purchased his grandmother's home near Sunset and the family used the 8 acres to raise farm animals and some hay. The whole family chipped in with the chores.

In 1985 Dan had an opportunity to be the maintenance man for the City of Oakesdale and the Town Marshall so they moved to Oakesdale. He re-joined the County Road Department in 1996 until his retirement in 2005. Dan could operate any type of heavy equipment possible and spent his lifetime doing just that.

Dan and Monna moved to Clarkston and have lived there since. He absolutely loved watching his grandchildren grow up and more recently watching his great-grandson play baseball. Dan and Monna explored every corner of Montana, Wyoming and South Dakota. They enjoyed visiting old ghost towns and old forts all over the west. He and Monna celebrated their 60th wedding anniversary in November.

He is survived by his wife Monna at their home in Clarkston; two sons, Dale Mills and Mike (Michelle) Mills both living in Spokane; five grandchildren, Jessica (Andy) Kuther, Kevin (Sara) Mills, Lindsay Mills, Jake Mills, Abigail (Justin) Mills-Skinner; four great-grandchildren, Slater, Henry, Ryver and Ryker; and by his brother, Dennis Mills in Cheney. Dan was preceded in death by his son Kevin in 1987 and by his parents.

The family suggests memorial gifts be to a charity of choice. On-line guest book is at http://www.corbeillfuneralhomes.com

Corbeill Funeral Home, Colfax, is caring for the family.