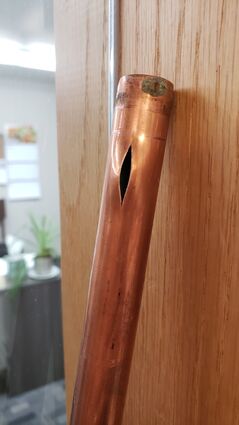 The first water line that burst due to defrosting on Nov. 30 at the Colfax Food Pantry.

COLFAX - The Colfax Food Pantry had two pipes burst in the last few weeks, Council on Aging and Human Services Executive Director Paige Collins stated in an email the morning of Tuesday, Dec. 27.

Despite part of the pantry being flooded, the pantry still held it's food distribution for the community on Tuesday, Dec. 27, and plans to continue with food distribution as usual. A carpet had been soaked, and neighboring local business 'Signs and Designs' was fully flooded.

The first pipe broke when it defrosted on Wednesday, November, 30. The second pipe to burst was a waterline off of Main Stre...