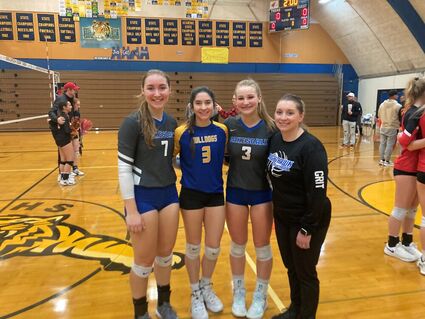 BURLINGTON, Wash. - For several Whitman County teams, the volleyball season concluded in the regional tournaments in Walla Walla or Colfax, or at the state tournament in

But for select players and coaches, there was one more opportunity to hit the nets and get one more volleyball game in for the 2022 season: the All-Star game at Burlington-Edison High School in Burlington, Wash. on Dec. 4.

Oakesdale won the WIAA 1B state volleyball championship while Colfax took second place in the 2B tournament.

The three players were a part of the Orange team at the volleyball match, which was coached by Oakesdale's McKinzie Turner, who helped lead the Nighthawks to an undefeated season in addition to the state title and coached five players to All-State selections, two First-Team and three Second-Team.

The Orange team, coached by Turner, went against the Brown team and, much like Oakesdale's regular season and state performance, didn't give up a set,

This would be the last organized high school volleyball matches for Anderson, Reed and Gibb – who all finished their senior years of volleyball this season.

Following the All-Star game, Turner will work on building another state championship team for Oakesdale in 2023, while Gibb will pass the reigns of the Lady Bulldogs to fellow All-State selections Brynn McGaughy and Lauryn York, who will be entering their junior and senior years in 2023,