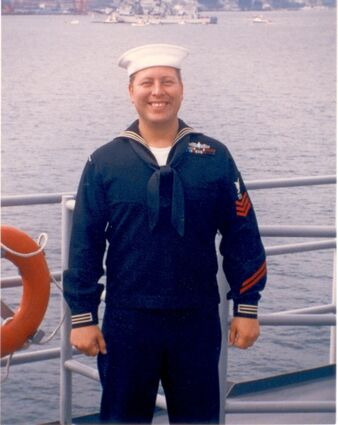 Steven Aspenwall during his service in the Navy

COLFAX - Local Veteran Steven Aspenwall joined the Navy in 1973 right after high school where he spent 26 years. He would be aboard his first ship in 1975.

His first ship was in Norfolk Virginia on a cruiser, "I was there from '75 to '78," he said, explaining that they then transferred him to a destroyer out of Napalm Florida from 1979. Then 1980 to 1982 he was in Puerto Rico at the missile fleet doing scheduling stuff.

Aspenwall retired from the U.S. Navy E-8 as a Senior Operations Specialist. He spent 17 years aboard ships, shore based personnel combat training, and trained 103 U.S. Navy...