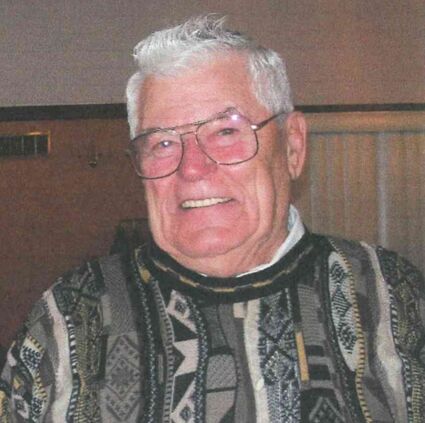 Donald R. Henderson, Colfax native, passed away December 10, 2022 in Colfax from complications of cancer. He was 94. A graveside service will be held in the spring in the Colfax Cemetery.

Don was born July 22, 1928, in Colfax to Roscoe and Ruth Baldwin Henderson. He grew up in Colfax and attended school here. Shortly after graduating from high school Don enlisted in the United States Navy.

He served for 27 years in the Navy as a First-Class Electricians Mate. After retirement from the Navy and his honorable discharge Don worked as an electrician for the Los Angeles Memorial Sports Arena in California. He moved back to Colfax in 1993 when he retired. He married Barbara Helt in Colfax in February 1995.

Don liked to work crossword puzzles, golf, and spend as much time as he could with his grandkids. He was very patriotic and was instrumental in the beginning of the Memorial Day Flag Program that decorates the Colfax Cemetery every Memorial Day. Honoring 17 veterans with their flags in its first year; that program now hosts a display of over 300 veteran's flags and Don played a pivotal role in its continued success. He also served on the Colfax City Council for 16 years.

He is survived by his wife Barbara at their Colfax home; was step-dad to Jane Wilcox of Benton City, WA, Marilyn Sue Mager of West Richland, WA, and Mike McNeilly, Colfax, has four grandchildren and two great-grandchildren and is also survived by his brother Joe Henderson and sister, Pat Bailey, both of Colfax. He was preceded in death by his parents and by a brother, Mike Henderson.

The family suggests memorial gifts in his memory be to the VFW Naval Relief or to the Flag Program at the Colfax Cemetery, c/o P.O. Box 739, Colfax, WA. 99111. On-line guest book is at http://www.corbeillfuneralhomes.com

Corbeill Funeral Home, Colfax, is caring for the family.