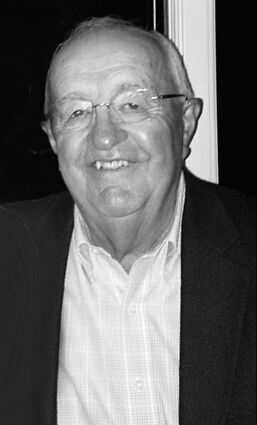 Dan was born on December 18, 1940, in Denver, Colorado. His family homesteaded in Elizabeth, Colorado, at the time. In 1949, they moved to the Kittitas Valley in central Washington, where his family bought a ranch. Dan was active in 4-H and played sports at Kittitas High School, where he met the love of his life, Karen Green.

In 1958, Dan started attending Washington State College, majoring in Agricultural Sciences. A member of the Alpha Gamma Rho fraternity, he worked with the show cattle and was a member of the Livestock Judging Team.

Upon Karen's graduation from High School, they were married on August 18, 1961. They spent Dan's senior year in Pullman, sharing many joy-filled times with lifelong friends.

Following graduation, Dan took a position on a ranch in Coulee City, Washington, and then bought a small ranch in Ellensburg, Washington, where he worked with his father, Ken.

In 1967, Dan was offered the position of Beef Cattle Herdsmanager at WSU, a position he held until his retirement in 2004. Dan treated this position like he did everything his entire life...wholeheartedly. One of the hardest working people anyone could know, he often worked seven days a week, and as he said to the administrator who did his paperwork: "8 to 5, Monday through Friday? Mister, you don't know cows very well!" Dan loved his work, the cattle industry, and the Cougs.

Dan lived a life of service; many called him a coach, teacher, board member, volunteer, leader, or mentor. The WSU Livestock Judging Team, Three-Forks 4-H Beef Club, Angus Association(s), Palouse Empire Fair, Washington Cattleman's, WSU Athletics, WSU Retirees, and the Pullman Presbyterian Church were all organizations that benefited from his contributions. But, perhaps one of the most influential was the mentorship he provided to the students who lived and worked at the WSU Beef Center, commonly known as the "Barn Boys" (and girls). It shows a common thread of wanting everyone and every organization he was a part of to be better than when he found it.

Many will remember Dan for his friendly greeting, listening ear, hearty handshake or hug, and a darn good football tailgate. He rarely knew a stranger; many were considered extended family to Dan and Karen. He has left a legacy of love, friendship, and a well-lived life (but he would hope for one more Cougar win).

He was preceded in passing by his parents, Kenneth and Genevieve (Jean) Coonrad.

The memorial service will be held at the Pullman Presbyterian Church on January 20th, 2023, at 4:00 pm. Corbeill Funeral Home of Pullman, WA, has been entrusted with arrangements. Memorial donations are suggested to a WSU Livestock Student Experience fund to honor Dan's love of cows and kids. Gifts can be sent to WSU CAHNRS PO Box 646228 Pullman, WA 99164. Online condolences may be sent to http://www.corbeillfuneralhomes.com