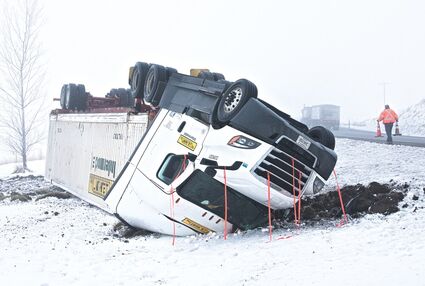 Fog and icy roads contributed to the rollover of a J.B. Hunt International semi truck on the intersection of US 195 and Crumbaker Road, north of Colfax on the evening of Dec. 11. Read more about this and more incidents on Page 3.

Whitman County Undersheriff Chris Chapman stated that the Whitman County Deputy showed up first, and that the deputy was told the driver had been trapped in the vehicle, "once we arrived, he was standing on the side of the road," Chapman said.

There were 16 slide offs from Thursday, Dec. 8 to Saturday, Dec. 10 due to the storm, Chapman confirmed.

"We did notice a couple early on accidents where the tires were inadequate," Chapma...