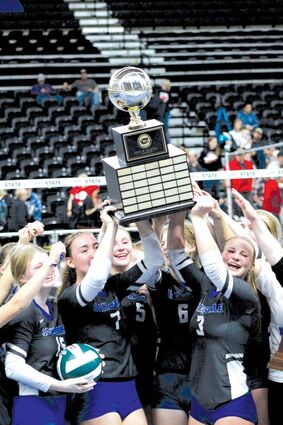 The Oakesdale Nighthawks hoist their 1B State Champion trophy earned during on Nov. 11 after defeating the Mossy Rock Vikings.

YAKIMA - It's rare that a team completes the "perfect" season – but the Nighthawks came as close as a team could get.

Throughout the whole season – Oakesdale has yet to give up a set to opponents outside of tournament play. And that streak extended into the 1B State Tournament.

Oakesdale began Day 2 of the WIAA 1B state tournament a little later than most teams. The Nighthawks didn't make their first serve until around noon on Nov. 11 in Yakima.

Nov. 10 Oakesdale looked like it was keeping the form it had had all season – winning both matches in three sets each to advance to the semifinal.

Naselle almost took advantage of the minimal time Oakesdale has spent on the courts and gave the Nighthawks a scare in the first set of a semifinal match on Nov. 11. But, ultimately, Oakesdale still came out with the 1-0 win with a 25-19 first-set victory.

Any worries or concerns that the first set created for the Nighthawks were quickly erased in the second – with Oaksesdale returning to form and jumping out to a 20-10 lead in the second set.

Oakesdale did end up getting that ever-elusive point to take a 2-0 lead over the Comets.

The third set was another strong early showing from the Nighthawks – opening the set with a 6-1 lead and extending the lead to 17-9 later on – and a final of 25-16 in the third and another 3-0 victory for the Nighthawks.

The Nighthawks advanced to the final game against Mossyrock in a rematch from the 2021 state championship game.

9-1 was the lead to start the second set before the Nighthawks expanded the lead to double digits at 19-8.

Mossyrock followed with an 8-4 run to get within seven points of Oakesdale but the defending champs ended up getting the 25-17 set win and the 2-0 lead over the Vikings.

The 2021 runners-up came out in the third set with a narrow 4-2 lead and eventually increased the narrow margin to 7-4.

Oakesdale kept chipping away at the lead until the set was eventually tied 14-14. 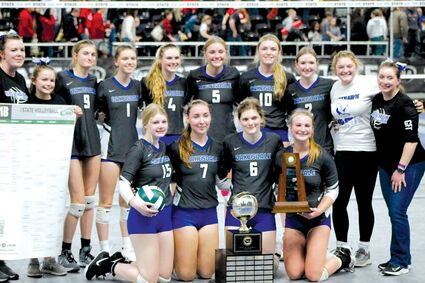 The Oakesdale volleyball team poses with its championship plaque and trophy at the WIAA 1B State Volleyball Tournament Nov. 11 at the Yakima Valley SunDome in Yakima.

"These girls have worked so hard and they've overcome things that no one else sees or no one else knows about," Oakesdale coach McKinzie Turner said. "And they just work hard. They came together and played as one unit today, one family. We always do a court convenance where we think of a saying or something that we want to hold true to us and this year it was 'all in.' And they were all in."

Oakesdale ended the season 22-0 overall (including the tournament) with a 9-0 record in league play.

"They just played together," Turner said. "They played beautiful volleyball today. Volleyball is a sport where you have to have a pass, a set and a hit to accomplish what you need to accomplish. And they did that. They played together as a team today. They fought hard, they played hard. They're amazing people. And I know this is something they're going to carry with them for the rest of their lives."

If there is such a thing as a dynasty in high school volleyball, it belongs to the Oakesdale Nighthawks.