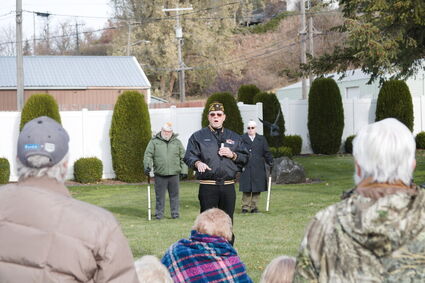 Ret. MSgt. Dick Mattausch speaks to the crowd at Veteran's Memorial Park Nov. 11. Behind him are John Loehn and Dan Hillman acting as VFW Rifle Team along with Mattausch .

"I have a T-Shirt that says only two defining forces have ever offered to die for you the American Veteran and Jesus Christ. That's about as true as you can get right there," said Pastor Mike Hill before opening the ceremony with a prayer for those that serve, and have served.

Everyone stood, and recognized the flag as Tim Braun sang the National Anthem. Rosalia Mayor, Lee Root then welcomed the crowd.

People who were participating in the program were then introduced, includ...