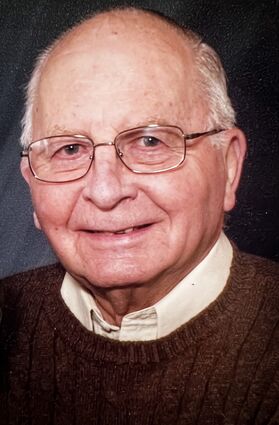 Harvey Roy Herman, lifelong Colfax resident, passed away on Thursday, Nov 10th at the age of 98. Harvey is survived by his daughter Shelly and her husband Mark Backstrom of Longview, Wash., and two grandchildren: Lane (Tyler) Salvig and Brady Backstrom, in addition to many nieces and nephews. He was preceded in death by his wife, Leona "Cubby" Herman, two older siblings: Lucille Dober and Harold Herman, his parents Fred & Katherine, and countless treasured friends.

Harvey was born on November 9th, 1924, on Green Hollow Road in Colfax. His parents were Volga Germans who immigrated in 1908 and established themselves as farmers in Whitman County. Harvey was a student at Greenhollow School and Martha Washington Elementary before graduating from Colfax High School in 1942. He attended business school in Spokane before returning to Colfax as a farm hand and then taking a position with Jones Truck & Implement. He joined the Colfax Volunteer Fire Department in 1950 and then went on to get his EMT certification in order to drive for both fire and ambulance. He served more than 35 years in this role and took great pride in his work as a first responder. He took full responsibility for the family farm along the Spokane highway in 1963. During the winter months, he continued working for JTI, acquiring almost 40 total years with them. In the early 1980s, Harvey began driving snow plows for the DOT, where he worked until 2002, when he "fully" retired at the age of 77.

Harvey married his wife, Leona, on September 15th,1950, and the two of them moved into their home on Mill Street, which they later expanded after their daughter, Shelly, was born. Known for their open-door hospitality, the Herman's hosted adults, teens, and children for events and social gatherings of all kinds. They would spend most of their 67 years of marriage in this home before moving into the Courtyard. They enjoyed traveling together, being involved in community events, and spending time with their friends and family. Harvey and Leona were founding members of Community Bible Church and Harvey was one of the team who constructed their Fairview building as well as served on the church board for many years. The ministries of the church continued to be a central priority. He was a disciplined, steadfast, and faithful follower of Jesus who loved others deeply and served generously.

Additionally, Harvey enjoyed elk hunting in the Blue Mountains, backpacking trips, and snowmobiling. He loved music – singing in choirs, quartets, small groups and with the church worship team. After retirement, he frequented JTI for "coffee with the boys".

Harvey loved being a Colfax resident, cherishing the depth of relationship that he had cultivated with so many members of the community. The family would like to extend their thanks to the crew at JTI for their hospitality and camaraderie, as well as to the staff & residents at the Courtyard for their steadfast care and kindness. Both have been a valued blessing throughout the past several years.

Corbeill Funeral Home will be hosting a viewing on Friday, November 18, from 9am to 5pm. A celebration of Harvey's life will be held on Saturday, December 3rd, at 1:00pm at the Catalyst Church - Fairview campus.

To honor Harvey's legacy of faith and service, memorial gifts can be given to the Whitman County Chaplaincy or the Colfax Volunteer Fire Dept. Cards of condolence and/or memorial gifts can also be mailed to the Courtyard at 300 S. Main Street in Colfax. Corbeill Funeral Homes in Colfax is caring for the family. On-line condolences may be made at http://www.corbeillfuneralhomes.com.