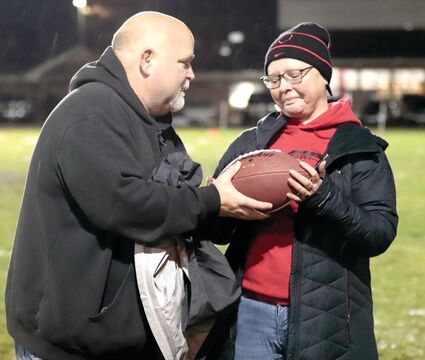 SPANGLE - Liberty boys football team took time before the District 6/7 crossover game to tell a local woman she's not alone in her fight with cancel.

Prior to the start of the Friday night, Nov. 4, game, Liberty Athletic Director Kyle Dodge presented Dianna Harrington with a football all of the players had signed.

The ball also contained a short note of support: "NO ONE FIGHTS ALONE."

After the presentation, Harrington received several words of encouragement and hugs from players, coaches and supporters.

The football team followed up the presentation with a 15-6 win over Lake Roosevelt to a...