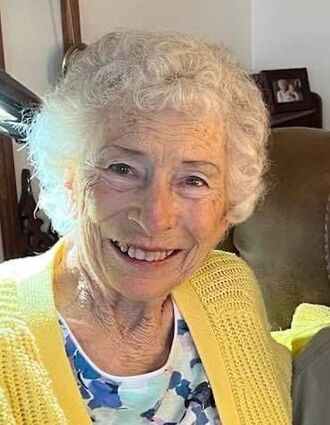 Marie Cousineau Ping died on October 31, 2022, in Pullman, WA, at the age of 89. She spent most of her life living in Lacrosse, WA, with her husband of more than 70 years, Donald (Don) Ping.

Marie was born Sept. 10, 1933 in Wapato, WA, to Albert (Slim) and Helen Cousineau. She was the baby of the family that included four sisters and a brother. Marie graduated from Lacrosse High School in 1951. She lived with the Ryan family during her senior year, because her parents had moved out of the area for work. She developed a dear, life-long friendship with Pat (nee Ryan) Barry during that year. Marie worked many part-time jobs while in high school, then worked in Spokane after high school for an insurance company. While in Spokane, Pat and her husband-to-be, Lawrence Barry, arranged a date for Marie with Don Ping, who was working in Lacrosse. Love sparks flew and they were married in March of 1952, settling in a small, 2-bedroom house in Lacrosse. 70 years later they were still living in the same house! Don and Marie had a large garden, and she was a "master canner": for all the time she had children at home, she canned nearly 2,000 jars of vegetables and fruits every summer, which the family feasted on until the next year's harvest. Up until a few years ago she still canned over a hundred jars of vegetables annually.

While raising her family, Marie worked outside of the home at various part-time jobs, including at the Lacrosse Café, as a school cook, for the Lacrosse Clipper newspaper, and, later, as a full-time office worker/office manager at the Pioneer Telephone Company. She retired in the late 1990's after more than 25 years of service. She had an amazing memory for recognizing people's faces, and remembering their names and family details. She knew every phone customer's number by heart, which at its peak was about 800! Her ready smile and happy, helpful demeanor made her well known in Lacrosse and the surrounding communities.

Marie loved to play card games, especially pinochle; she loved to read, travel and especially enjoyed going to the casinos to play the slot machines and watch the shows. In her youth, Marie was a good athlete, and she remained very active up until the last 3 years when her heart started to fail. She was always quick to volunteer at local fundraisers or to bring a meal to a needy friend or neighbor.

Marie revealed in the lives of her grandchildren and great grandchildren, who returned that adoration. She was well known for spoiling both generations! The Lacrosse home was always a welcome retreat for the family to share holidays, birthday parties and just to visit and enjoy her delicious meals.

She will be dearly missed by her family and friends. A celebration of her life will be held at a later time. Corbeill Funeral Home of Pullman, WA has been entrusted with arrangements.

In lieu of flowers, please consider donating to one of Marie's favorite charities in her name: check written to Special Olympics of Washington Sent to: Whitman County Cougars% Debbie Niehenke. 851 Niehenke Rd. Colton WA 99113. Online condolences may be sent to http://www.corbeillfuneralhomes.com