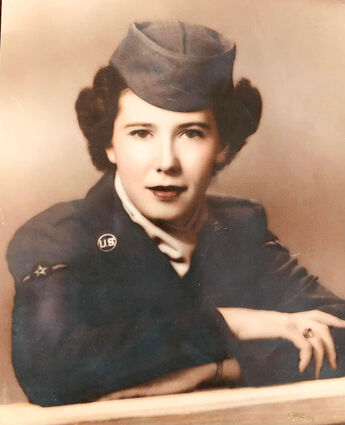 It was during this time that she met William Keith Zaring while stationed at the Pentagon in Washington DC. Following their wedding on August 26, 1952 in Washington, DC they moved to the Zaring family farm in Whitman County, WA where together they have made their home on the farm south of Dusty. Lelia was an expert seamstress and enjoyed quilting. Her family was very important to Lelia and she always made them a top priority in her life. In her later years Lelia lived and breathed for her grandchildren, always enjoying the time she spent with them at the farm.

Lelia's faith was important and she was an active member of the Lacrosse United Methodist Church for years. She could always be found coordinating social events and receptions at the church.

Lelia was always proud of her service in the Air Force, and she and Keith celebrated 70 years of marriage this past August.

She is survived by her husband Keith; her two sons Roger (Peggy) Zaring of Lacrosse and Paul "Chuck" (Tracie) Zaring of Kennewick, WA; a sister MaryAnn Bell and her 4 grandchildren and 2 great grandchildren. She was preceded in death by her parents and her other siblings.

The memorial service will be held on Wednesday, November 9, 2022 at 2 PM at Corbeill Funeral Home in Colfax, WA. Military Honors will follow the service. She will be laid to rest at the Lacrosse Cemetery in the spring. The family suggests memorial gifts be made to WHEAT We Honor Every American Troop, Colfax Wa. https://greatnonprofits.org/org/w-h-e-a-t-we-honor-every-american-troop

Online condolences may be sent to http://www.corbeillfuneralhomes.com