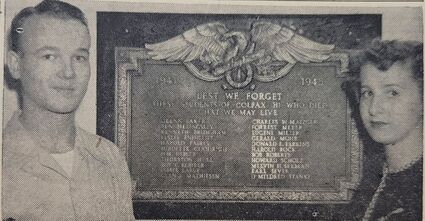 75 YEARS AGO - This bronze plaque was placed in the first floor to the 22 former students who lost their lives in World War II.

From the Colfax Gazette, Friday November 5, 1897

Mrs. Hugh Rogers Knocked Down at Her Door,

The reign of terror in which the lawless element has held almost every portion of the county for weeks does not subside. The Garfield Enterprise gives the following account of a dastardy assault upon Mrs. Hugh M. Rogers, a lady once a resident of Colfax:

Mrs. H. M. Rogers had an encounter with a prowling villain in her door yard Wednesday night, shortly before 8 o'clock. She had walked out but a few steps from the door when she wa...