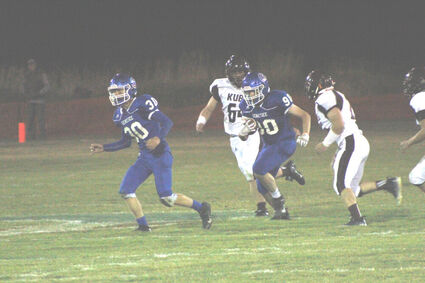 Kole Scharnhorst (30) blocks for Sam Stewart (90) in a Whitepine League match against Kamiah Oct. 14 in Genesee

Despite being on the right end of a lot of things on that checklist, the Colton/Genesee Bulldogs couldn't stop the offense of the 7-1 Kamiah Kubs, losing 66-22 in an Idaho Whitepine League matchup.

Kamiah (7-1, 6-0), who currently occupies first place in the Idaho Whitepine League standings, struck first in the game – returning one of the aforementioned kickoff returns for a touchdown.