Eagles fall at Homecoming against Patriots

SJEL loses second of the season against Liberty Christian 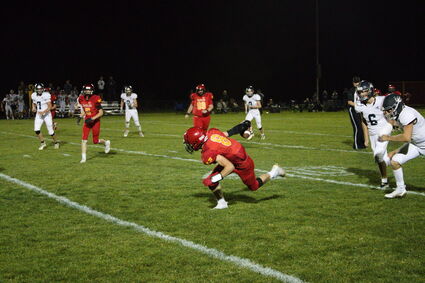 St. John-Endicott/LaCrosse quarterback/running back Tanner Fleming makes a last-second catch to end the first half against Liberty Christian Oct. 7

ST. JOHN - St. John-Endicott/LaCrosse headed back home after suffering a 76-0 loss to DeSales on Sept. 30 in hopes of upsetting the also-undefeated Liberty Christian High School.

The Eagles weren't able to pull off the upset, losing 66-16 to the Patriots.

St. John-Endicott/LaCrosse were still without key players, with starting quarterback and defensive back Matthew DeFord missing his second

straight game after suffering an injury against Garfield-Palouse on Sept. 23, and Tanner Fleming for the second straight game got the start in his absence.