By TEREN KOWATSCH
THE GAZETTE

Eagles size advantage proves too much for Vikings in season opener 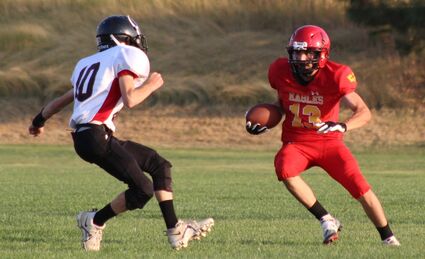 St. John-Endicott/LaCrosse and Garfield-Palouse's season opener was originally scheduled for Sept. 2 in Palouse but was rescheduled to Sept. 1 in St. John.

This was Garfield-Palouse's first game since the 2018 season where the team went 9-2, an almost four-year gap between the last time the Vikings hit the gridiron, and it showed, with the Eagles coming out with a 55-0 victory.

The Eagles had 20 players listed on their roster (including a player out with an injury) compared to the Vikings' 15. The rescheduling of the game made several players ineligble to play due to not meeting the requir...