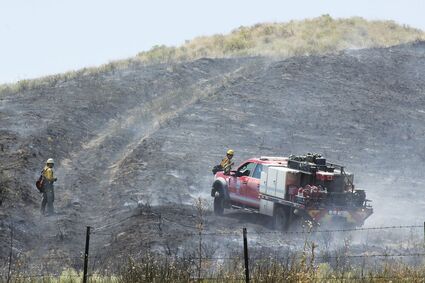 Firefighters from Pasco Fire Department deal with the aftermath and cleanup of the Riparia Fire on Friday, Aug. 5.

The fire was reported at about 4:30 p.m. Thursday and state fire assistance was mobilized quickly at the request of Whitman County Fire District No. 8 Fire Chief J.B. Broeckel.

At the time, the fire was estimated at 3,000 acres and growing, according to the chief.

Ilda and Chad Lindgren, who live on Riley's River Ranch, decided to evacuate from their home as the flames looked like they were approaching.