One dead, one injured in unrelated ATV crashes 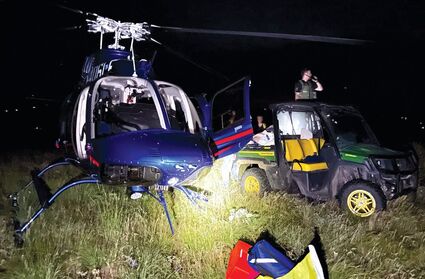 Rescue personal called in a helicopter for an ATV crash on Tekoa Mountain on Sunday night.

COLFAX - Two unrelated ATV crashes over the July 4 weekend left one man dead and another injured.

Alfred Laponza Jr., 50, of Seven Hills, Ohio, was pronounced dead at an crash scene near Colfax on Saturday, July 2.

At 7:09 p.m., emergency dispatchers received a report of an ATV crash with unknown injuries in the area of McNeilly Road about a mile west of the city.

Deputies responding to the scene determined an adult male - later identified as Laponza - was riding a Honda 3-wheeler in a field when he went over a dirt berm at a high rate of speed, records show.