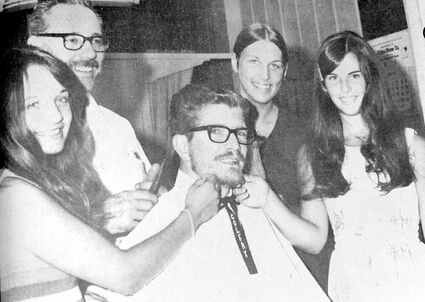 The recently organized Whitman County Union Veterans association will hold its first annual encampment on July 15 and 16, under the jurisdiction and direction of Nathaniel Lyons Post No 19, G. A. R. This organization is intended to band together socially and fraternally all of the old soldiers of the war of the rebellion, whether members of the Grand Army or not, and the coming camp-fire is intended to fill the place of the encampments of the grand army. The program of exercises has not yet been made out, but it is in contemplation to give a program of public exercises, including an oration by some well known speaker, with music. Recitations, a parade and addresses of a reminiscent character by old soldiers and sailors.

Colfax defeated Endicott twice last week at the Elberton picnic and on Sunday the team went to Endicott and defeated the same team again. The score Sunday was 7 to 3 in favor of Colfax.

The two games at Elberton was for a purse. By winning both of the games the members of the club secured a purse amounting to $275. This purse is to be divided up between the members of the team after the expenses are paid. The game at Endicott Sunday is one of the three games to decide the Whitman County league championship. Both teams finished the season together, being tied for the first place. Each team lost one game each. Each team lost one game each. Endicott defeated Colfax in the first game of the season and Colfax returned the favor when the Endicott team played their league game here.

To decide the tie, three games are to be played, the team winning the first two games to secure the pennant, and a purse which was put up by each team. If Colfax wins the second game which is to be played at Colfax on Sunday no other game will be played. If Endicott wins then a third game is to be played on some neutral grounds.

From the Colfax Gazette-Commoner, Friday, July 4, 1947

Richard R. Hanson, a summer school student at Washington State college from Mercer Island Wash., suffered only minor injuries early Tuesday morning when he ran off the Pullman highway two miles from Colfax. According to Deputy Sheriffs Lloyd Whitmmore and Lorraine Rice, who investigated, Hason fell asleep at the wheel, hit a guardrail and came to a stop against a pine tree. He hitchhiked a ride to Pullman where he reported to police officers, who called the sheriff’s office here.

Dedication of Boyer park and marina on the Snake river 18 miles south of Colfax was hailed Sunday as the culmination of six years of planning by Chairman D. I. Hopkins of the Whitman County port commission. About 200 attended the brief ceremony under cool and cloudy skies.

The veteran port commission predicted that the water in the swimming area and adjoining marina and lake would clear up and become “very inviting” for swimmers and other recreationists upon completion of Lower Granite dam.

“We now have a lake about 300 miles long from this spot to the mouth of the Columbia, and beyond,” he quipped, “and if that isn’t long enough you can keep going to Japan.”

The Rosalia community vacation bible school was June 16 - 20 at the Rosalia Christian Church. The theme “Ranch House of Friends’’ was followed by five sites labeled Trading Post, Campfire, Range Trail, and Lodge. There was also a preschool site and nursery. Approximately 55 children attended each day discovering a new site and learning about Jesus. The Friday evening finale included a play, singing and memory verses.

County commissioners in March signed a contract with Regional Disposal Company to dispose of the county’s garbage. The new contract drops cost to the county from $68 a ton under the current contract to $53 a ton. With an average day loadout of more than four 23.5 tons trucks, Whitman County expects to save more than $400,000 under the new contract.