Award honors memory of Tyler Morse, who passed away in 2012 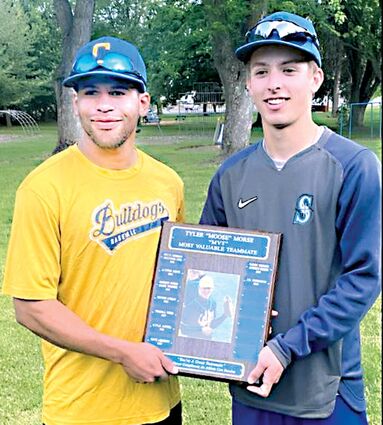 Tammy Peterson | Special to the Gazette

J.D. Peterson, right, is presented with the Most Valuable Teammate award.

COLFAX - Bulldogs baseball player J.D. Peterson was awarded the Most Valuable Teammate by his coaches.

The MVT award was made in honor and named after former local player Tyler Morse, who passed away in 2012 to cancer three years after graduating high school.

"It is the only award we give out," Colfax baseball Coach Scott Parrish said.

The Most Valuable Teammate tradition was started by J.R. Robinson of Colfax, and Morse's mother, Kimberly Morse.

"It has to do with having a good attitude, and just being an overall good teammate to the team," said Peters...