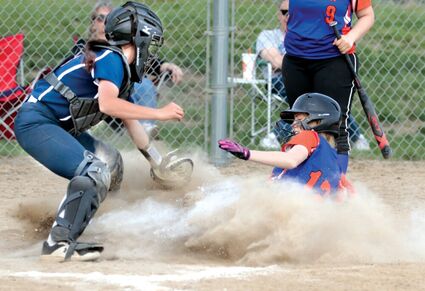 Timberwolf Khloe Morrison is tagged out by the Liberty Christian catcher as she tries to steal home.

The Timberwolves were swept by the Liberty Christian Patriots on Thursday, May 5, at home.

Then lost a doubleheader to cross-county rival, Garfield-Palouse (story on Page B1).

In the opener against Liberty Christian, hot bats put the Patriots up 4-0 in the first inning. The girls from Richland added 3 more in the top of the 2nd.

And the scoring continued.

Down 11-0 in the bottom of the fourth, the Timberwolves scored 1 run.