Four girls compete for title in pageant at Empire Theatre 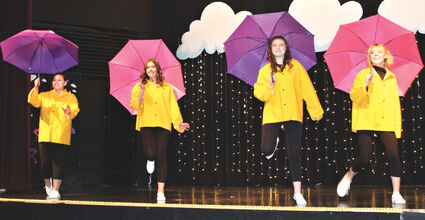 Miss Tekoa royalty contestants, from left, Joan Barnowski, Eliona McElderry, Savannah Rinehart and Khloe Morrison dance to "Singing in the Rain" in the opening number of Saturday's pageant in Empire Theater in Tekoa.

TEKOA - After more than two years, a new Miss Tekoa has been crowned.

The 90-minute "Let it Reign" program featured the pageant contestants competing in talent, an impromptu question and poise and composure.

The show opened with the royal contestants and the departing court dancing to "Singing in the Rain."