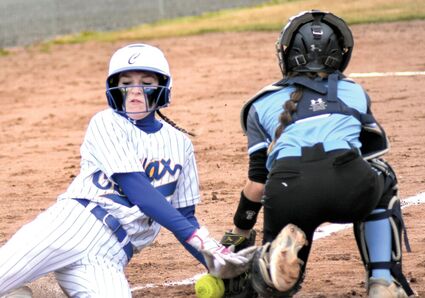 Devan Becker slides home for the sole score against Freeman on March 22.

COLFAX - The Bulldogs girls fastpitch softball team (4-1, 2-0 league) added two more wins to the list during the last week, but it also added its first loss of the season.

On Tuesday, March 22, the local girls lost a close game, 2-1, to the Freeman Scotties.

On the mound, pitcher Abbie Amend tossed a no-hitter for the Scotties.

Meanwhile, Colfax's Jorja Koerner gave up two runs in the third inning, but pitched flawlessly for the remaining six innings.

Freeman had 5 hits during the game, including two by Dixie Sefton, and one each by Jenna Sharp, Jenny Sharp and Chloe Adams.