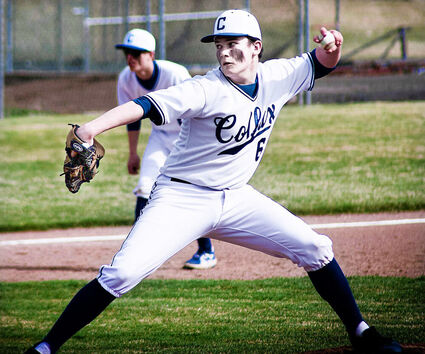 Goldie Akesson | Special to The Gazette

Alex Mortensen pitches in a game against Jenkins (Chewelah) on March 26.

COLFAX - The Bulldogs boys baseball team is off to a ho-hum start, winning one and tying one in the last two weeks.

Playing in a tournament in Orofino, Idaho, the Colfax boys (1-2-1) opened their season Friday, March 18, with an 8-8 tie against Orofino (6-2-1) in the Asotin Panthers baseball tournament.

Both teams put up 2 runs in the first inning and Colfax added another in the 2nd. The score would remain 3-2 until the bottom of the fourth, when the Maniacs put 5 more runs on the board to take a 7-3 lead.

In the top of the 6th and 7th innings, Colfax scored twice each to tie the game at 7...