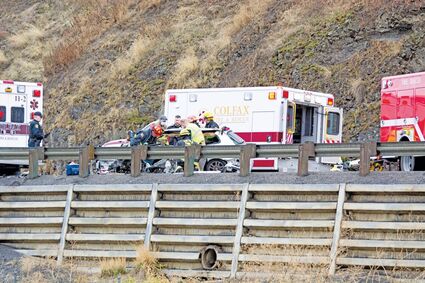 Colfax emergency responders provide care to a person injured in a pair of collisions on Nov. 4.

COLFAX - A 2002 Honda Civic struck two cars going the opposite direction on State Route 195 in Colfax on Nov. 4.

Five people were injured. Three were taken to the hospital by ambulance and two by a Colfax police officer, stated Colfax Police Chief Bruce Blood on Nov. 5.

The Civic was driven by Ion Ritchie, 37, of Rigby, Idaho. He was heading north at 10:27 a.m. when he "lost control" and collided with two oncoming vehicles near Cedar Street.

Ritchie was reported to have received a serious injury and was taken to the hospital.

Samuel and Judith Palpant, of Spokane, were in the first vehicle...