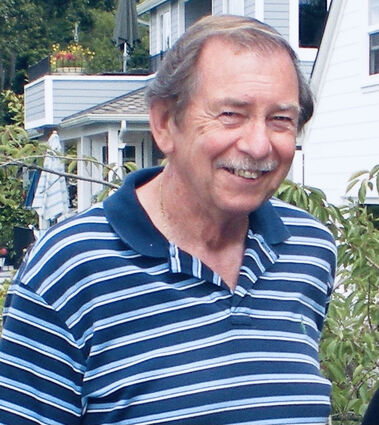 His parents were Lillian and Gordon McFarland, longtime Colfax residents. His paternal grandparents were Verta (Phipps) McFarland and C. W. McFarland – pioneer, Whitman County grain dealer and businessman. Jim attended the Hamilton Grade School and was a 1956 graduate of Colfax High School. While he was a student, and for a time after high school, he was employed at the S and S Grocery Store. His friendly disposition made him popular with store customers and those who had groceries delivered by the old gray S and S panel delivery rig. Jim moved from Colfax in the 1960s, and continued his career in the grocery business as a meat cutter in East Wenatchee, and Cashmere before moving to a management position in Selah. He ended his working career at Seaside, Oregon, when he retired from the Safeway corporation.

While at Seaside, he and his wife Jan owned and maintained some properties – which they sold when they finally retired to Yakima. Jim had many hobbies including hiking, woodworking, and photography. As a member of the Cascadians, he climbed a number of the Pacific Northwest major peaks, including Mt. Adams and Mt. Rainier. His love of dogs, cats, and classic cars was also evident throughout his life.

He had one brother, Robert Wesley McFarland, who was born in 1931 at Colfax and died in 2020 at Tacoma. His survivors include his wife Janice (McCreary) and her sons Douglas S. Stahl and Lyle D. Stahl; also sons Michael (and Joy) McFarland, Robert (and Cindy) McFarland, and daughter Jenifer (McFarland) Bair from his first marriage to Mary Lou Neill. Jim also had seven grandchildren: Erik, Michelle and Conner McFarland; and Jace, Seth, and Ryan Bair; he had one great-grandson, Soren McFarland.

A family celebration of life gathering will be planned in the future. Donations in his honor may be made to the National Humane Society.