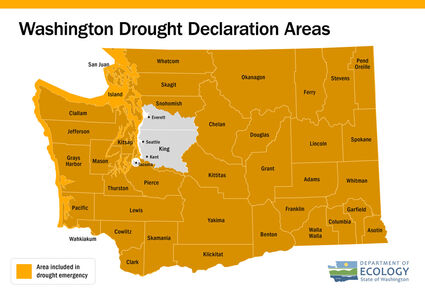 The Washington State Department of Ecology's map shows the areas affected by the emergency drought declaration.

OLYMPIA – Gov. Jay Inslee declared an emergency drought for most of the state on July 14.

The drought affects every county in the state but excludes an area that encompasses most of King County, half of Snohomish County, and Tacoma by itself. It stretches from north of Everett to south of Kent. Tacoma is the only area in Pierce County not impacted by the drought, according to the state.

"Many areas of (Washington) are currently under the stress of these extreme drought conditions," said Inslee.

A drought emergency means the water supply is projected to be below 75% of average and poses a...