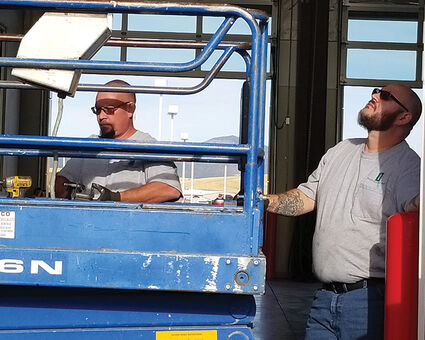 Sam Vietz, left, and Joe Girard started their company after working 10 years together for Davis Door, Inc., in the Seattle area.

They first were co-workers in Seattle, fixing and installing garage doors from Belltown to Redmond, Issaquah and Kirkland.

Now they team up on the Palouse as Palouse Garage Door, which opened in Colfax in September. Sam Vietz and Joe Girard are assisted by their wives, Nicole and Misty, who manage the office, based out of the Vietz home in Colfax with storage space in Pullman at Ken Paulson's Plumbing.

The company works on residential and commercial overhead garage doors, sliders and gates.

They serve all of Whitman County plus into Latah County and the Moscow area.

Girard works two days per week with the operation, while living in Ellensburg and working as a cardiopulmonary critical care specialist at Kittitas Valley Healthcare.

The plan is for him and his family to move to the Palouse after their youngest child graduates from high school in 2020.

"I love doing garage doors," said Girard, who grew up in Tacoma. "I like diagnosing the problems and being able to fix them."

In Seattle, Vietz and Girard both worked for Davis Door Service, Inc., for 10 years before Girard was laid off and later moved with his family to Arizona where he went to Carrington College to train as a registered therapist – after souring on doing garage door work in the heat.

Vietz, the son of Terry the barber in Colfax, grew up in Pullman, graduated in 1995, and now has two sons at Colfax High School.

At least one day per week, he works at Schweitzer Engineering Laboratories doing maintenance on garage doors.

"They've got hundreds of them," said Vietz, who co-founded Palouse Garage Door with Girard after working the past five years for Overhead Door in Lewiston.

"I was the only face around here fixing people up," Vietz said.

The new company both installs doors and repairs them, open Monday to Friday from 8 a.m.- 5 p.m., with extra time for weekend calls.

What would Vietz and Girard like to do with the company in the future?

Garth Meyer is a reporter and sports writer at the Whitman County Gazette.