Gorillas pull away from pesky Bulldogs 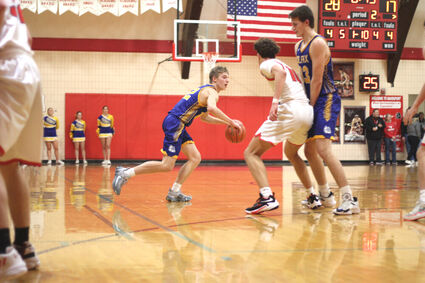 Seth Lustig (left) dribbles past a Davenport defender on a screen set by JP Wigen (right) in a 2B Northeast league basketball game Jan. 13 in Davenport.

DAVENPORT - Feb. 25, 2010 in the District 7 Championship. That was the last time the Gorilla boys basketball team knocked off the Colfax Bulldogs.

That is, until Friday, Jan. 6, 2023, when Davenport pulled away from its closest league challenger thus far to top Colfax 69-51 and snap an 18-game, nearly 13-year losing streak to the Whitman County foe.

Most of Davenport's senior-laden team was in preschool or diapers in Feb. 2010.

Now they are entering adulthood while helping their squad to 14 wins in 15 games, including snapping the Colfax skid.